"Sith Warriors are deadly, expert fighters equipped with a lightsaber and the Force. Warriors can rush into a fight with Force Charge and Smash multiple targets with the Force
Primary Attribute: Strength. Strength increases the damage and critical chances of the Warrior’s Melee and Force powers. This remains so for both the Marauder and the Juggernaut Advanced Classes
Advanced Classes (Available at level 10): Sith Marauder and Sith Juggernaut
Sith Marauder (Damage): Sith Marauders excel in melee combat. Marauders fight with two lightsabers and can build Rage quickly with Battering Assault, unlocking the use of more powerful attacks like Vicious Slash and Rupture
Sith Juggernaut (Damage, Defense): Sith Juggernauts are powerful and defensible warriors that wear heavy armor and can crush targets with the Force. Juggernauts can rip their target’s armor apart with Sundering Assault, intercept damage for an ally with Intercede, and those specialized as an Immortal can endure a great deal of damage and threaten enemies away from allies."
―In-game Codex (Game Rules)[src]

The Sith Warrior is one of two Force-sensitive, Sith Empire-aligned classes. Unlike the Sith Inquisitor, the Sith Warrior is known to focus more on melee combat and lightsaber skills. The Sith use the Dark side of the Force and fight against their sworn enemies, the Jedi and the Galactic Republic. Famous Sith Warriors include Darth Malgus.

"I will bring the Republic to its knees."

"There won't be a heart left beating."

The Sith Warrior is entrusted with the most important tasks assigned by the Sith Empire: destroying the Emperor's enemies and enforcing his rule all across the galaxy. They use base emotions such as fear, anger, and hatred to fuel their focus and determination for achieving their goals, and they do it with brutal efficiency. The Sith Warrior is a master of domination and control, intent on utterly annihilating his enemies. The Warrior has clear goals and seeks the most direct, confrontational approach. Despite focusing mainly on negative emotions to fuel attacks, the Sith Warrior is capable of showing much loyalty and determination to further the empire's purposes.[1]

While some Sith serves obediently, enacting the letter of a Master’s law, others risk plotting to destroy this overseer and take that power for themselves. Others may carry such rebellion even further, with unwhispered aspirations to embrace the light and destabilize the Empire from within.[2]

Champion Of the Dark side

An unstoppable force of darkness, the Sith Warrior is entrusted with the task of destroying the Empire's enemies and enforcing Sith domination across the galaxy. The Warrior channels the destructive emotions of fear, anger, and hatred to purge weakness from body and mind and become a being of pure, brutal efficiency.

Destined to eradicate the incompetent chaos created by the Jedi, the Sith seek to rule the galaxy through power and intimidation. The armies of the Sith Empire are trained to accomplish this task, but they require the leadership of bold Sith Warriors—loyal and mighty overlords—who will drive them to conquest and victory.

These cold-blooded conquerors waste no time with cunning manipulations and carefully-crafted plans. Sith Warriors crush their opponents and stride toward their goals with dreadful determination, leaving ruin and annihilation in their wake. Emanating awe and terror at every step, they accept nothing but absolute obedience from their followers. In turn, Sith Warriors can serve as loyal subjects to their own dark masters, often surprising enemies and allies with their rigorous honor and perfect discipline.

Whether they align their ambitions with those of the Dark Council or become renegades in pursuit of their own goals, they are never far from the action. Their fierce hatred of the Jedi keeps Sith Warriors at the forefront of any conflict with the Republic. The passion to eradicate the Jedi Order fuels many of their actions, but that does not make them single-minded fools.

Ultimately, the destiny of any Sith Warrior is his own to choose… and woe to those who would stand in his way. They are ruthless.

A natural leader in any context, a Sith Warrior inspires both fear and undying loyalty to his followers and allies. Though they rarely exercise patience for incompetence or indecisiveness, Warriors have realized the importance of strength in numbers in their war with the Jedi , and have learned to accept and sometimes even encourage their comrades, whether they are like-minded Sith, ruthless Bounty Hunters, or others who embrace the darkness.

Still, images of Sith Warriors capture their passion and vigor in war. Bold lightsaber tactics and surprising bursts of Force power force their foes to stay on the defensive until they are weakened and summarily destroyed. Though their saber tactics are always aggressive, some Sith Warriors choose to dual-wield or adopt other non-traditional fighting styles to accentuate their combat prowess.

Despite their reliance on their strength in the Force, Warriors have no compunction about donning heavy and intimidating suits and armors. Unthreatened by the use of technology for biological augmentation, Warriors’ vestments often make use of dangerous and experimental components which imbue the wearer with immense strength and fortitude.

A Sith Warrior's skills with a lightsaber are unrivaled. Driving at their enemies with strong, crushing blows, the Warrior quickly beats his foes into submission or death. Though the lightsaber is the Warrior’s primary method of attack, he also uses his dark command of the Force to paralyze, terrify, and kill. Protected by heavy (Juggernaut)/Medium (Marauder) armor and his powers of intimidation, the Warrior wades into the thick of the fight and unleashes pure hatred and fury to eliminate all who would stand against him.

The Warrior's command of the Force is ruthlessly geared towards attacks that inflict pain and suffering. Choking a victim is not only an effective way to defeat him but also an effective way of getting him to see one’s point of view. Against weak and unworthy targets, the Warrior’s Force Choke can kill in an instant.

There is perhaps nothing so terrifying as having a dark Sith Warrior hurtling through the air toward you with his lightsaber smashing down. Such a forceful attack immediately puts adversaries on the defensive, and sometimes ends the fight outright. Channeling his fury, the Warrior can release an explosion of dark energy, stunning nearby enemies, allowing a quick follow up to finish them with unstoppable strikes from his lightsaber.

"Ranking from birth among the most elite in the Sith Empire, <name>'s deadly skills and command of the dark of the Force have become legendary. Lightsaber in hand, <name> has carved a path of destruction through Republic foes and scheming Sith adversaries alike, eventually becoming the favored enforcer of the Sith Emperor himself. But now the Emperor has betrayed the Empire, forcing <name> to join with unlikely allies to defeat a seemingly invincible foe...."
―In-game Codex (Persons of Note)[src]

The Sith Warrior visits many planets, during their storyline. These are as following:

These species are available to the Sith Warrior:

Sith Warriors use a Rage system to fuel their abilities. Rage is generated by basic attacks and certain abilities such as Force Charge or Assault. Rage can be built up but it has a cap and it goes down slowly over time when out of combat.

Strength increases the damage and critical chances of the Warrior's Melee and Force powers. This remains so for both the Marauder and the Juggernaut Advanced Classes. Warriors excel in melee combat, and a Warrior out of range of his or her targets is out of his or her element. Warriors can quickly enter the fray with Force Charge, build up Rage with Assault and spend that Rage on powerful attacks like Vicious Slash and Smash.

Sith Juggernauts are Sith specialized in combat endurance and were known for wearing armor that provided them special protection in battle. Sith Juggernauts were known to primarily wield one lightsaber in combat and were frequently adept at using the Force to cause terror and despair in enemy combatants.

Sith Marauders are Sith Warriors who fought for the Sith Empire during the Great Galactic War and the Cold War that followed it circa 3,653 BBY. They specialized in dual lightsabers and dealing high amounts of damage to enemies in melee combat. Marauders specialize in destroying their enemy; within and without.

Sith Warrior garments tend to be more heavily armoured than that of the Sith Inquisitor: 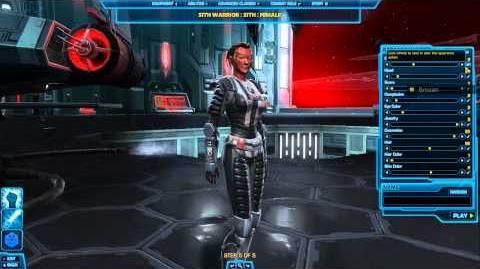 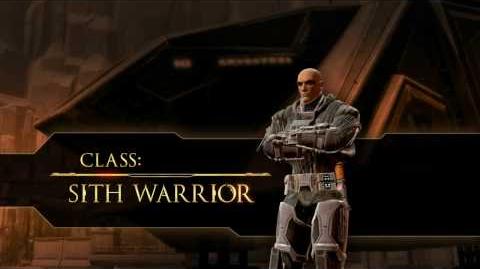 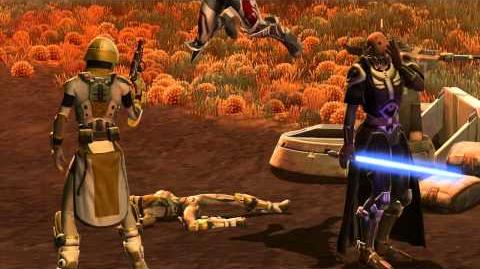 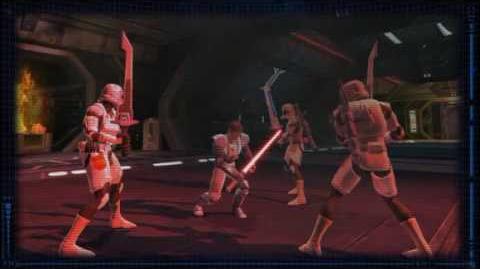 Retrieved from "https://swtor.fandom.com/wiki/Sith_Warrior_(playable_class)?oldid=113590"
Community content is available under CC-BY-SA unless otherwise noted.