"Smugglers are lucky, scrappy and cunning, able to utilize cover and execute powerful Charged Bursts to take down targets at a great distance
Primary Attribute: Cunning. Cunning increases the damage and critical chances of the Smuggler's Ranged and Tech powers. This remains so for both the Gunslinger and the Scoundrel Advanced Classes, while the Scoundrel’s Cunning additionally increases the effectiveness of healing powers
Advanced Classes (Available at level 10): Gunslinger and Scoundrel
Gunslinger (Damage): Gunslingers wield two blasters and attack from cover with abilities like Charged Burst and Sabotage Charge. Gunslingers are extremely powerful when attacking from a secured cover position and receive several abilities that help ensure they remain in cover
Scoundrel (Damage, Healing): Scoundrels utilize dirty tricks and don't fight fair, using Stealth to get the jump on targets and attack with close-range abilities like Blaster Whip and Dirty Kick. Scoundrels also make excellent healers when playing the part of the underworld Sawbones."
―In-game Codex (Game Rules)[src]

The Smuggler is one of the four Galactic Republic-aligned playable classes. Along with the Republic trooper, Smugglers do not rely on the Force itself to get things done, only their guts and guns.

Quick, Clever, Answers to No One

Sometimes luck is more important than skill, but it never hurts to have both.

Lawlessness has become common in the wake of the devastating war between the Republic and Empire. Shifting political allegiances and marauding pirates have made independent space travel a dangerous enterprise. Cut off from traditional supply routes, entire star systems waver on the verge of collapse. An adventurous spirit who’s not afraid to break a few rules can make a handsome profit hauling cargo to these hotspots, but it requires fast reflexes, fast wits and a fast draw with a blaster. Even then, the life of a Smuggler is always a gamble.

Stacking up enemies as fast as they stack up credits, Smugglers only survive in this galaxy by being slick, sneaky and street-smart. Whether sweet-talking an attractive alien or bargaining with a hardened criminal contact, the Smuggler’s charm is a notorious asset, and often the ticket to turning around a deteriorating situation. If circumstances get too complicated, though, count on a Smuggler to always have an escape plan. Experienced in flying under the radar, Smugglers are amazingly elusive. Yet when backed into a corner, they quickly become cunning and often deadly combatants.

Above all else, Smugglers make their own destinies. Despite their affinity for credits, Smugglers have been known to turn down lucrative opportunities when the clients have demanded too much control. Some Smugglers are even more discriminating—refusing to work with slavers and representatives of the Sith Empire. It’s a business where one is always looking for trustworthy allies, but they are often few and far between. Whether running an Imperial blockade or shooting down a double-crossing gangster, Smugglers are always flying by the seat of their pants. Every deal carries the chance for wealth beyond their wildest dreams… or an anonymous death in the harsh void of space.

Relations with the Republic

Faced with choosing an allegiance in these uncertain times, Smugglers have been forced to consider the implications of trying to operate under the tight controls imposed by the Sith Empire. Though never the most patriotic members of Republic society, many Smugglers have decided that siding with the Republic is siding with freedom, and of course, freedom is everything.

The Republic has never indulged a systematic prejudice against Smugglers. Generally speaking, they have more commonly tangled with laws and law enforcement measures from specific star systems, not the greater Republic. Thus, it has not been overly difficult for the Jedi and the Republic military to accept Smugglers as allies in resisting the growing dominance of the Sith Empire.

As smart and stealthy as Smugglers might be, surveillance recording from various spaceports and secured warehouses has captured them in the act. These images highlight their ability to adapt to almost any situation. They’re careful and cunning when sneaking into enemy territory, but when caught in the open, whether bluffing or gambling, they appear comfortable staging a courageous stand.

They don’t wear fancy armor or carry high-powered blaster rifles, but Smugglers are outfitted for action nonetheless. Wearing comfortable, flexible clothing with some custom modifications, Smugglers are able to stay light on their feet and quick on the draw. Usually carrying a fast-firing blaster or two, Smugglers have everything they need to shoot their way out of trouble. Though style is rarely their intent, it seems to come naturally to Smugglers, and their dashing duds generally complement their roguish charm.

The Smuggler's approach to fighting is guileful and improvisational. Preferring to tip the odds in their favor from the start, Smugglers often rely on the element of surprise, using stealth and trickery to catch opponents off guard. Despite the sly tactics, they are more than capable of holding their own in a fair fight. Fast on the draw and a crack shot with a blaster, Smugglers tend to shoot first and be the last ones standing.

Rather than relying on movement-impairing heavy armor, the Smuggler uses nimble footwork and the environment for defensive advantage. Shooting from reflex and instinct, the Smuggler is still a crack shot from any angle.

Primarily designed to stun or incapacitate a target for a quick getaway, the tricks of the Smuggler’s trade can also be used to buy a minute for a more carefully aimed, and often quite lethal, head shot. Quick, reckless, and unfailingly lucky, the smuggler can pop out from cover to fire a flurry of blaster bolts at multiple enemies. This maneuver breaks the enemies’ charge and provides cover fire to allow the smugglers’ allies time to set up a coordinated counter-attack.

"Notorious starship captain <name> has earned fortune and glory across the galaxy as a treasure hunter and Republic privateer. Pursued by the Sith Empire as a wanted criminal, <name> always stays one hyperspace jump ahead of the enemy's warships. But as a new foe threatens Republic and Imperial worlds alike, the time has come for these old rivals to join forces...."
―In-game Codex (Persons of Note)[src]

These species can be played as a Smuggler:

The Gunslinger focuses on ranged combat using dual pistols. The Saboteur spec focuses on various explosives. He relies on delayed damage and random variations more than the Sharpshooter, but in an extended fight has the potential to do amazing damage. The Sharpshooter spec uses specialized direct shots to attack. The damage is extremely predictable, while not quite as high as the Saboteur. Sharpshooters also tend to have more frontload, meaning they do a lot of their damage at the start of the fight rather than ramping up to it. The Dirty Fighting spec is the opposite, relying on periodic damage and debuffs to truly maximize its output. While the Sharpshooter will have more frontload, a fight that carries out for more than the first rotation of abilities will tend to favor the Dirty Fighter, and the advantage ramps up the longer the fight goes on.

Whichever specialization you choose, the Gunslinger is one of the few cases of a pure class. You do damage, lots of it, and nothing else. You can focus your entire rotation of abilities on bringing the most DPS to bear against your opponents, and nothing else. Get to know a couple tanks and healers though. As much fun as the class is solo, it's even more fun in a group.

The Scoundrel focuses on close- to medium-ranged combat, as well as healing. All Scoundrels are stealthers, which makes them play MUCH different than the short/med range Troopers, even though they don't look so different on paper. The Scoundrel can specialize into either Sawbones which focuses on healing, or Scrapper whose skills favor melee range with some short range also, or Ruffian which favors short range with some melee range thrown in. Keeping in mind that all three specializations hold onto the abilities common to all Smugglers. While the advanced abilities tend to be stronger, there is always the baseline to fill in the gaps.

As a healer, the Sawbones is always welcome in a group. The Smuggler abilities will leave you the ability to run solo occasionally, but you'll never feel like a champ doing damage.

The Scrapper is really at his best when he opens the fight from a stealthed attack at point blank range. There are longer range abilities, but they're not your payday.

The Ruffian won't deliver the big hits the same way the Scrapper does, but with more mid range attacks is a little less dependent on the melee range opener. Don't assume that melee is a problem, but you're not designed to take big hits the way a Trooper is.

Regardless of specialization, the Scoundrel is going to have MANY abilities to track and will be very busy in a fight. Learning to bring as many of those to your group as possible will mean the class is just as challenging at 60 as it was at 11.

Smugglers focus on single handed blasters and a clever cover mechanic. Some abilities are only usable from cover, so it is necessary that the player become acquainted with it quickly. All Smugglers are able to deal a good amount of damage, and the Scoundrel class is able to heal, but none of the skill trees provide the ability for a Tank role in group play. The resource for their abilities is Energy. The smuggler starts off with 100 energy and it does not increase naturally (Although some skills can raise it by a small amount). Your energy regenerates faster at higher energy levels. As your energy decreases, so does the rate at which it recovers. To maintain a high amount of energy, use Flurry of Bolts regularly to allow your energy to recover.

The Corellian XS Stock Light Freighter is a freighter built for speed and to transport cargo securely. It is equipped with a standard laser, torpedo batteries and mounted turrets.

The XS Freighter is one of the fastest ships in the galaxy and featured several ways to secretly store cargo, making it ideal for smugglers.

Smugglers can utilize light and medium armor, preferring flexible clothing for maximum agility and instead relying on its environnement and the assistance of a group for cover. Their clothing is often heavily customized with modifications and upgrades. 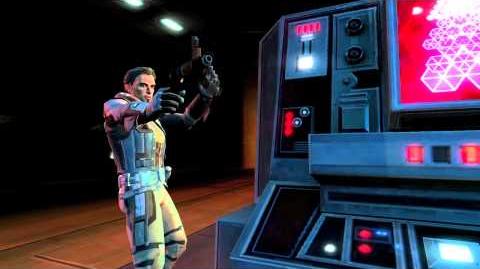 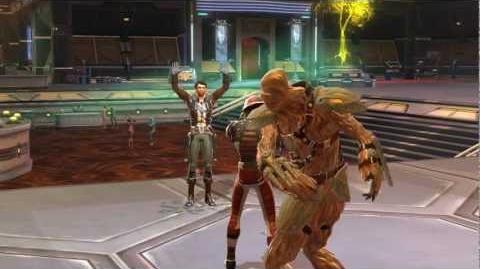 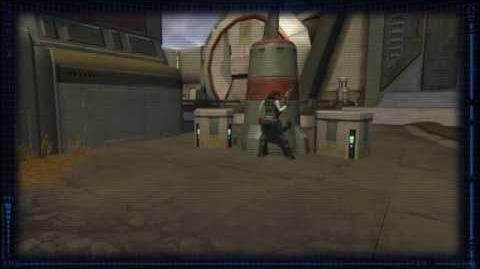 Retrieved from "https://swtor.fandom.com/wiki/Smuggler_(playable_class)?oldid=110810"
Community content is available under CC-BY-SA unless otherwise noted.