Spindrall is a male human Sith Master serving the Sith Order during the Great Galactic War and the Cold War between the Sith Empire and the Galactic Republic.

Long before the Cold War between the Sith Empire and the Galactic Republic, Spindrall was tasked to see newly recruited acolytes on Korriban and test them to see how strong they are. In his years of service, he tested Zash and Harkun during their times as acolytes in the Sith Academy. In the years that followed, Spindrall was seen as a lunatic, so consumed with the dark side of the Force that he was though to be drunk on it. Soon, he was no longer sent new acolytes to test, Instead, he took failed acolytes under his wing and trained them as best he could so they might regain honor in the eyes of their masters in the Academy.

During the Cold War, a Sith Inquisitor was sent to him by Harkun as part of their first story mission. Spindrall told the Inquisitor that in order to get his approval they need to pass a "Trial of Blood". As a result the acolyte needed to slay Spindrall's own acolytes to prove their worth. When the acolyte passed the trial, Spindrall recited the Sith Code and gave his approval. 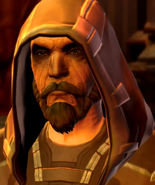 Retrieved from "https://swtor.fandom.com/wiki/Spindrall?oldid=115121"
Community content is available under CC-BY-SA unless otherwise noted.