Star Wars: The Old Republic Wiki
Register
Don't have an account?
Sign In
Advertisement
in: Pages with broken file links

Over the centuries, the Miraluka adapted and developed the ability see their enemies and surroundings through the Force.

Some Jedi Masters speculate that it is precisely because of a Miraluka’s trust in the Force rather than their eyes that they fight so fluently with Lightsabers.

Miraluka who have joined the Jedi Order have proven to consistently be strong in the Force and exceptionally skilled in the martial arts.

The Guardian stands firm, daring his opponents to attack.

Advanced training and knowledge of the Force allow this Jedi Guardian to quickly slay his attacker.

Through years of training, the Sentinel learns the art of duel welding Lightsabers, a skill that gives him an upper hand.

By channeling the Force, the Sentinel can see holes in enemy defenses, and potential flaws in their combat techniques.

Nar Shaddaa’s upper levels are full of vendors and shops that cater to every taste imaginable.

This sprawling mass of skyscrapers is considered to be one of the most dangerous...

Dominated by a black market that caters to every indulgence...

Nar Shaddaa is famous for its expansive, vibrant cityscape...

The volcanic currents running under Hoth’s surface not only provide the heat necessary for subterranean plant life but occasionally cause fissures to appear on the surface.

Pushing technology to the max in order to survive the deadly climate, several outposts and bases like this one have been hewn directly out of the living ice.

The Republic and Empire are locked in a war of attrition on Hoth, with every kilometer of desolate ice hard won.

Hoth’s icy walls and tunnels provide cover, not only for the specially adapted wildlife, but also for secret military

The Mystics of the Voss are able to use the Force to see the future and provide guidance to their people.

Some players will customize their Sith Warrior so they can charge into the thick of battle, taking the full heat of enemy aggression.

Other players will choose a path for their Sith Warrior that allows them to channel their rage, destroying their enemies as quickly as possible.

The Salky Hound is a favorite pet of criminal and mercenary groups who purchase the beasts on a thriving black market.

For reasons unknown, the Gormak have a fierce hatred of anything associated with the Voss.

The Gormak have a natural camouflage that allows them to virtually disappear into the Voss landscape.

This Gormak proudly displays superior armor and weaponry that his people have engineered from salvaged technology.

Originally bred by Republic scientists, the Salky Hound was intended to be the perfect genetic creation.

Initial tests of the Salky Hounds found that they were too uncontrollable to be of any use to the Republic, and the project was discontinued.

Because the Gundark is a vicious combatant, arena promoters have inadvertently helped them proliferate throughout the galaxy.

With extremely acute senses of hearing and smell, a Gundark has no trouble locating his prey in even the densest terrain.

Although Gundarks usually hunt in packs, a lone Gundark can easily hold his own against most opponents.

Specifically designed to excel at short-range combat, the AR-34 Enforcer is best kept at range.

This AR-34 is doing what this line of droids does best – security for Hutt crime lords.

Initially commissioned by the Hutt Crime Cartel, the AR-34 is now in use by various mercenary and criminal groups.

When innovative engineering combines with superior flexibility, the result is the X2-C3 Imperial Astromech.

Because of their versatility, no Imperial installation is without at least one X2-C3 unit.

Many Trandoshans have dedicated themselves to “the Hunt” – a religious ideal that pits their skill as warriors against any challenge the galaxy can throw at them.

Trandoshans are hunters by nature and will wait patiently for days to take down a target.

The mountain-top capital city of Voss-Ka houses the Tower of Prophecy, as well as the Republic and Imperial Embassies.

The Voss are great lovers of art with a distinct style that has been in existence for thousands of years.

The Gormak strip mine Voss' resources, building tech monoliths and leaving desolation behind.

The tropical rifts of Belsavis are home to a wide range of plant life, not found anywhere else in the galaxy.

A small landing pad and guard tower overlooks part of the prison complex known as “the Tomb.”

Mostly covered in ice, there are a few places on the surface of Belsavis capable of supporting life.

Outside of this tropical oasis, Belsavis’ surface is covered in perpetual ice and snow.

Amidst the twisted metal ruins, the Republic has begun building settlements on Taris.

The overgrown surface of Taris still holds clues about the endless city that once covered it.

After centuries of darkness, sunlight and plant life have returned to Taris’ Undercity.

Dromund Kaas is home to the Emperor, but Kaas City is also the headquarters of Imperial Intelligence.

The deep jungles of Dromund Kaas are dotted with relics and ruins of the ancient Sith.

The Empire spent over one thousand years on Dromund Kaas rebuilding their mighty war machine.

The deep jungles of Dromund Kaas are dotted with relics and ruins of the ancient Sith. 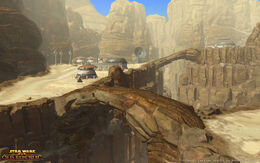 Sandcrawlers are the mobile headquarters for Tatooine’s industrious Jawas.

Small spaceports like this one are where smugglers often conduct their business. 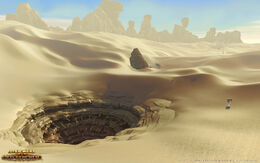 This Sarlacc is just one of the many hazards of Tatooine’s desert wastes.

The Sith Inquisitor blends a stunning combination of Force powers and double-bladed Lightsaber attacks to defeat his opponents.

The Sith Inquisitor lets loose an arcing blast of Force lightning to drain the life from a Republic Trooper.

The cunning Sith Inquisitor is the living embodiment of the destructive power of the dark side of the Force.

Unleashing a barrage of Force Lightning, the Sith Inquisitor gives these Republic troops a taste of his wrath.

Lightsaber drawn, this Jedi Consular takes on a calm, controlled ready-stance in preparation for an attack.

The power of the Force enables this Jedi Consular to immobilize an army of battle droids.

Drawing on her deep connection to the Force, the Jedi Consular easily repels her Flesh Raider opponent.

Drawing upon her Force powers this Jedi Consular sets off on a special mission for the Republic.

The subterranean caverns of Alderaan hide many mysteries and ancient ruins.

Built against Alderaan’s majestic mountains, the towers of Castle Organa add to the landscape’s famed beauty.

From trade centers such as this one owned by the Ulgo family, Alderaan’s citizens once placed bets on the nerf races.

This mountain bridge spans a deep valley in the highlands of Alderaan.

After a thorough reconnaissance of the area, the Imperial Agent calls in reinforcements.

In order to complete his mission, this Imperial Agent searches the hills of Balmorra for stolen ammunitions.

From the safety of higher ground, an Imperial Agent finds the optimal position to take out unsuspecting targets.

Weapons drawn, an Imperial Agent stands off against a dual-blaster wielding bandit protecting his shipment.

A Force Leap and a powerful overhead strike will make short work of this Flesh Raider.

With a wide arsenal of Force powers at his command, the Jedi Knight has nothing to fear from this lone attacker.

Channeling the power of the Force, the Jedi Knight faces his opponent with confidence.

This encampment in Broken Valley is the Republic’s forward position in the battle for Balmorra.

Once a major population center, much of Broken Valley was abandoned following the Great War.

Famous for producing weapons of war, Balmorra has impressive stockpiles of munitions.

The Coruscant Spaceport is one of the most recognizable features of the planet’s endless skyline.

Nestled between the Senate and Spaceport, this building and its’ taxis help travelers navigate across the planet.

This docking area is a busy hub for taxis, cargo transports, and reconstruction equipment.

Armed with his signature Lightsaber, the Sith Warrior can easily protect himself from the enemies behind him, while making short work of the ones before him.

This Sith Warrior reaches out an unseen hand to Force Choke the life out of her would be assailant.

The Jedi is overcome by the strength and power of a dual Lightsaber wielding Sith Warrior.

Gangsters, pirates, and other marauders create dangerous roadblocks for the Smuggler.

A stealthy Smuggler surveys the room where stolen contraband is located.

Blaster drawn, a Smuggler secures a control room inside an enemy outpost on Ord Mantell.

Taking cover behind a supply crate, a Smuggler prepares to ambush a group of Separatist soldiers.

A team of Troopers scours an unsecured town after a recent resurgence of Separatist attacks.

On the battlefield, Troopers work together with tactical precision to assault an enemy outpost.

A lone Trooper stands amongst the burning remains of a Republic Walker on the war-torn world of Ord Mantell.

The heavy rifle is as much a part of the Trooper as his right arm and he would as soon be without one as the other.

A Bounty Hunter’s armor conceals a wide variety of weaponry.

Blasters and other standard firearms are key to the Bounty Hunter’s survival.

A Bounty Hunter takes fire, as he narrowly misses a blaster shot.

A Bounty Hunter’s flamethrower projects a stream of fire onto his enemy. 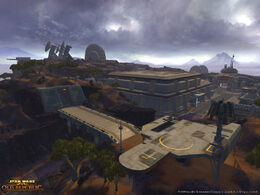 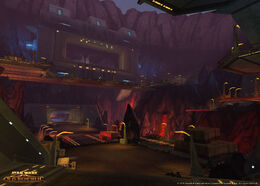 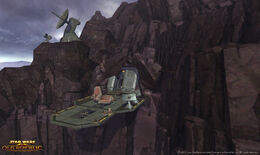 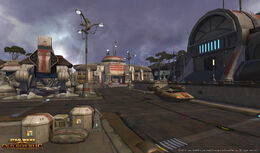 Cantina of the Hutt Palace

An Acklay’s seemingly impenetrable pincers are no match for a Jedi.

Face wraps and deflective armor provide protection from the harsh elements of Korriban.

It takes skill to avoid detection by the Jedi.

On Korriban, you must be prepared to defend yourself at all times.

Not far from the Jedi Enclave on Tython, a traitor is confronted.

From character concept to 3D 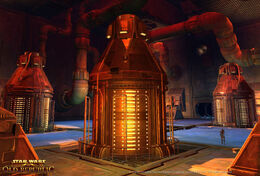 An underground generator and its in-game counterpart

A Kel'Dor cautiously surveys the room for potential threats.

Jedi and a Sith battle amongst ancient ruins.

The main hall of the Sith Academy

A Jedi strikes down a Nexu 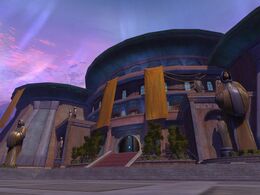 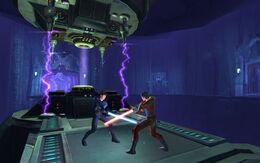 The Sith Homeworld of Korriban