"When a Hutt reaches the pinnacle of his career, it is his right and privilege to let his mind and body atrophy–to turn away from menial concerns and strictly indulge his appetites. So it goes with Nem’ro. Decades ago, Nem’ro was a scheming and ambitious leader among the gangs of Jiguuna. Block by block, factory by factory, he took control through brutality, blackmail and sheer business savvy. He paid his henchmen handsomely and overthrew Jiguuna’s previous ruler in a bloody coup. He never did get rid of the competing gangs; he just cowed them and demanded a share of the profits. Now, comfortable and confident, Nem’ro is free to let his lieutenants run the show while he concentrates on what makes life worth living: food, arena fights and reveling in the respect of his peers. Only the rise of Fa’athra, a Hutt upstart and would-be rival, threatens to force his attention back on business affairs."
―In-game Codex (Persons of Note)[src]

Nem'ro is a Hutt crime lord from the world of Nal Hutta. He manipulated many gangs so that he could establish himself in such a powerful position.

In the decades leading up to his success, Nem'ro was a cunning leader in the gangs of Jiguuna, an industrial town on the Hutt's adopted homeworld of Hutta. He was an ambitious Hutt, using blackmail and savage cunning to systematically muscle his way into complete control over Jiguuna. His current businesses included Shvash Gas mining, dealing spice and trafficking weapons. His path to success had earned him enemies along the way including Fa'athra the Hutt, "Huttsbane" and even Black Sun.

Like almost all Hutts who reach the peak of their career, Nem'ro left the day-to-day operation of his enterprises to underlings while he concentrated on food and revelry.

For information on this subject beyond The Old Republic, see: Nem'ro on Wookieepedia 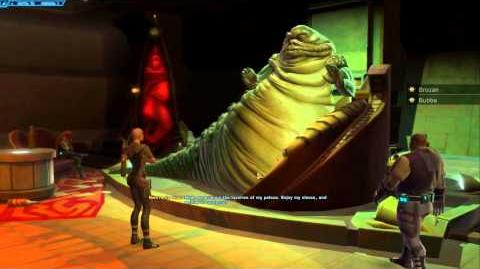 Nem'Ro The Hutt
Add a photo to this gallery

Nem'ro the Hutt
Add a photo to this gallery

Retrieved from "https://swtor.fandom.com/wiki/Suudaa_Nem%27ro?oldid=104916"
Community content is available under CC-BY-SA unless otherwise noted.