Start a Wiki
This article is about the Flashpoint. You may be looking for the starship.

The Esseles is a Republic flashpoint. It is available from levels 10-14 and serves as the Republic's introduction to flashpoint gameplay. Players discover the flashpoint on their way to Coruscant soon after leaving their starting world. They may also queue for the flashpoint with the in-game menu.

The Esseles spaceship is a Republic transport that ferries civilians to and from the capital world of Coruscant. Soon after players board, the ship comes under assault. Attacked by a powerful Imperial warship under the command of a ruthless Moff, the outgunned and outnumbered crew of the Esseles ready themselves to fight against the coming Imperials.

Players must band together with the crew of the Esseles and each other to battle back the Imperial boarding parties, defend the ship's passengers, and free the transport from the Imperial warship's grasp.

The Esseles Flashpoint follows the below track of missions:

Talk to the Esseles Passenger

The flight of The Esseles begins relatively quiet. During this time, players may repair equipment or buy items such as medpacks that may be used in the mission. Talk to an interesting passenger to move to the next phase.

Get to the Bridge

The ship is under attack! The Republic heroes have to fight through Imperials onboard to get to the bridge and meet First Officer Haken.

When players arrive at the bridge, they find that the captain has been killed during the space battle and that the next in command, First Officer Haken, is panicking. The group talks to Haken for a few moments before Grand Moff Kilran hails. He tells the group that Imperial agents are coming aboard to take an Ambassador Asara prisoner, addressing her as an anti-Imperial terrorist.

Go Down to the Primary Airlock

The much larger warship plans to capture The Esseles via tractor beam and board with soldiers. The Republic heroes must fight through more Imperial agents to reach the airlock and cut off the boarding party.

Once players have reached the airlock, they join with Commander Narlock who has brought 3 security guards to assist. The group are given a brief chance to take up position against the coming assault.

Sith Lieutenant Isric leads the boarding party. He is accompanied by two Imperial boarding droids, and additional Sith Troopers join him after the battle starts. After defeating Isric, Ambassador Asara will reveal herself. She also relays that a bounty hunter, named Ironfist, has boarded the ship. This bounty hunter has sabotaged the players by cutting off the ship's bridge, hijacking the security system and putting the bridge into lockdown. Commander Narlock suggests that the ship's chief engineer may have a solution.

The heroes fight their way to the engineering bay. Here they talk with Chief Engineer Salen and his team (who are pinned behind a ray shield) about how to get access to the bridge. Asara catches up with the heroes and they discuss how to disable the power and clear the lockdown.

The group is faced with their first major decision. Players may vote (see: Flashpoint) to either reset the reactor, which would also vent the engineering section and the engineers inside into space, or risk being overwhelmed by Imperials and go throughout the ship to shut down the system another way.

+150 - for sacrificing the engineers

+150 - for risking more danger instead

The flashpoint takes a different path depending on the choice made:

[Light side] Shut Down Secondary Conduits

Players must fight their way around the Engineering deck in order to reach and shut down four key power conduits. Returning to Salen continues the flashpoint.

[Dark side] Resetting the Reactor

The reactor is reset and the engineering crew is hurled into space, killing them. This clears the lockdown, and the flashpoint continues.

Players fight their way to the bridge and disable the last of the auxiliary power controlling the bridge's ray shield. The heroes then enter the bridge to confront Ironfist himself.

Mandalorian bounty hunter Ironfist briefly mocks the party before engaging them. He is immediately assisted by two Imperial Troopers, and two more join during the fight. Ironfist uses his jetpack to push back his attackers and also possesses a short-term invincibility shield.

After the players defeat Ironfist, they return to Haken to discuss their next plan of action.

In order for the Esseles to escape, the tractor beam holding the ship must be disabled. The heroes must ride a shuttle to the battlecruiser, shut down the beam's power from within, and make it back alive. Ambassador Asara will accompany the boarding party.

Before leaving, First Officer Haken reminds players that the Imperials are after Ambassador Asara. He suggests that if they leave Asara on the battlecruiser to be captured, the Imperials would have no more reason to pursue the Esseles and their trip to Courscant would be assured.

The heroes board the Imperial battlecruiser. Leaving behind a small team of soldiers along with Asara to guard the ship, they must venture alone through the battlecruiser and its batallion of troops and droids. Progressively harder boss droids stand between players and the tractor beam. Grand Moff Kilran becomes just as progressively irritated with the heroes' success.

Once the tractor beam is disabled, the heroes return to the shuttle to find Sith Apprentice Vokk attacking its guarding party. Vokk has killed all of the troops and nearly strikes down Ambassador Asara, knocking her unconscious. The heroes rush to intervene. After the battle, Ambassador Asara awakes and beckons the Heroes to return to the Esseles.

Another major decision: The heroes are given the choice to return with Ambassador Asara or leave her behind to ensure their escape.

+150 - for leaving Ambassador Asara behind

+150 - for returning with Ambassador Asara despite the Imperial threat

The flashpoint takes a different path depending on the choice made:

[Light side] No One Left Behind

The heroes return to the Esseles where First Officer Haken commends their victory. Ambassador Asara follows behind to congratulate them as well, surprising First Officer Haken that she returned with them. The ship then continues on its journey to Coruscant.

[Dark side] Leaving the Ambassador

The heroes leave Ambassador Asara on the battlecruiser before returning to the Esseles. First Officer Haken congratulates them on their victory, glossing over the ambassador's abscence. The ship then continues on its journey to Courscant.

There are two known lore objects that can be unlocked during this Flashpont.

This is the first boss.

This is the second boss.

This is the third boss.

This is an optional boss within the Esseles.

This is the final boss within the Esseles. 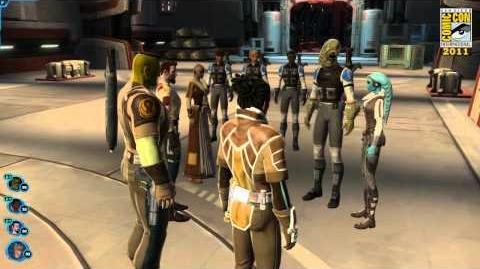 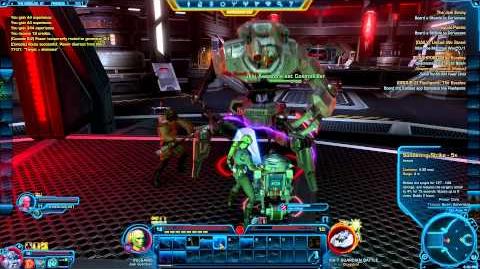 Star Wars The Old Republic - Flashpoint Guide The Esseles
Fan made guide to the Esseles Flashpoint. 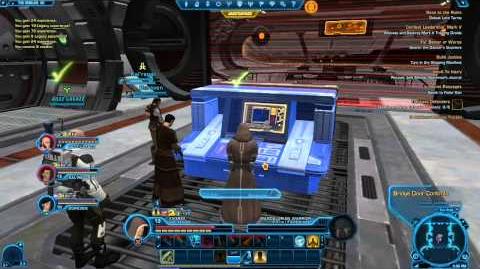 Retrieved from "https://swtor.fandom.com/wiki/The_Esseles?oldid=119185"
Community content is available under CC-BY-SA unless otherwise noted.