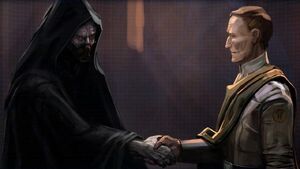 The Treaty of Coruscant marked the end of the Great Galactic War between the Galactic Republic and the Sith Empire. The two factions met on Alderaan to discuss the terms of peace, but at the same time the Empire launched attack against the Republic on their home world of Coruscant. After taking Coruscant this allowed the Empire to put the Republic in a position where they needed to surrender on their terms. This treaty marked the beginning of the Cold War.

Retrieved from "https://swtor.fandom.com/wiki/Treaty_of_Coruscant?oldid=10922"
Community content is available under CC-BY-SA unless otherwise noted.