"If you were to face an ancient Sith Lord in combat, you would learn that we are as children playing with toys compared to the prowess of the old masters."
―Kreia, referring to Hord's prowess in lightsaber combat[src]

Tulak Hord, known as the Lord of Hate and Master of the Gathering Darkness, was a Dark Lord of the Sith that ruled during the early Sith Empire, commanding great armies and possessing a mastery of the dark side of the Force and lightsaber combat which left him nearly unrivaled. During battle, Hord wore a black mask, making him a fear-inspiring sight.

A Force-sensitive male Tulak Hord was a student of the dark side of the Force and a pupil of the early Sith Empire. Rising through the ranks, Hord was feared by his rivals even in his early days, having mastered the art of lightsaber combat and manipulation of the Force. During his early years, Hord fought an honorable duel against a Dashade named Khem Val, who later became his most faithful ally. Assembling a massive army of followers, Hord and Val led a campaign of terror against rebellious militants on the planets Yn and Chabosh, crushing them. While on the campaign, Hord was approached by a Sith known as Aloysius Kallig who sought to serve him; however, Hord dismissed him. Kallig refused to accept dismissal; however, and challenged Hord's best general and beat him. After Kallig's victory, Hord decided to accept him, and he led Hord's troops to numerous victories. During the battles, Hord employed his knowledge of Sith rituals, draining the strength from his opponents and feeding off of it. Earning the titles Lord of Hate, Master of the Gathering Darkness, and finally, Dark Lord of the Sith, Lord Hord went undefeated, slaying all who dared to challenge his might. While Kallig's military prowess gained Hord enormous success, it also intimidated the Dark Lord, who feared that Kallig could become a very dangerous rival. Hord decided to deal with the situation by having Kallig assassinated, with his family subsequently going into hiding.

Lord Hord continued his endeavors into the arts of Sith sorcery, authoring many tomes of knowledge and crafting his personal holocron. Rumored to have known the secret to eternal life, Hord scattered much of his teachings in hidden and hard to reach locations to ensure only the worthy could obtain his knowledge. Discovering and conquering the Dromund system, it was believed that the Sith Lord conquered over a hundred worlds for the Empire. One who did prove worthy during Hord's life was his only known apprentice, Ortan Cela, who came to learn much from the great Sith.

Appreciating his relationship with the honor-bound Khem Val, Lord Hord placed his servant and ally in suspended animation inside a stasis chamber deep in the heart of what would later serve as Sith Lord Naga Sadow's tomb on Korriban. Orton Cela would kill his master not long afterwards by stabbing him through the back, and Cela's Dashade servant Veshikk Urk]] consumed the dying Sith Lord's Force energy.

At some point following his death, his loyal minions constructed a massive tomb for their fallen master in the Valley of the Dark Lords on Korriban. Entombed with him were several tomes of his writings, his holocron, and his mask.

Following the conclusion of the Great Hyperspace War and the bombing of Korriban by the Galactic Republic and Jedi Order, much of the histories of Lord Hord were destroyed or lost. While the tomb remained intact, traps were in place to keep looters away and test the worth of any knowledge-seeking Sith. By the time of the Jedi Civil War several centuries after the retreat of the Sith Empire into the Unknown Regions, Jedi Padawan Revan entered the tomb, successfully navigating its traps and discovering the Dark Lord's mask, taking it with him when he departed. Also with in the tomb, the Jedi discovered several treasures, including three rare lightsaber crystals: an amethyst, a firkrann and a bondar crystal.

Before departing the world, Jedi Revan discovered Sith Master Jorak Uln hiding inside the tomb after the man was deposed by fellow Master Uthar Wynn as the Headmaster of the Sith Academy on Korriban. In the throes of his anguish and madness, Uln captured Revan and his companions, planning to torture them before executing them. While imprisoned, Revan and his companions joined forces with the captured Sith apprentice Mekel and defeated Master Uln. Shortly after, the exiled Jedi Meetra Surik investigated the tomb during her journeys, finding it to have been looted, and the entrance collapsed.

Following the return of the Sith Empire, some of Hord's artifacts were rediscovered. Darth Marr, before gaining a seat on the Sith Emperor's Dark Council, discovered Hord's lightsaber hidden on Dromund Fels.

Tulak was a master of Lightsaber combat, according to a few. As Kreia said, he was known as "the greatest lightsaber duelist of the Sith Lordes" going on to say that his skill was considered "remarkable even for his time, when many true lightsaber masters lived" when asked she reveals that were the exile to face an ancient Sith Lord in combat, he would learn that "we are as children playing with toys compared to the prowess of the old masters. Later, Khem Val said almost the same thing, when he told the Inquisitor about how Tulak broke through the Yn and Chabosh alone.

Tulak was also a master of telekinesis. According to Khem Val when the Inquisitor sees the ruins of the Endar Spire, "The great Tulak Hord once pulled a ship this size from the sky". 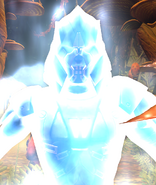 Retrieved from "https://swtor.fandom.com/wiki/Tulak_Hord?oldid=109242"
Community content is available under CC-BY-SA unless otherwise noted.