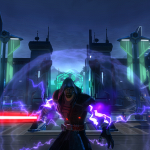 Welcome to my profile page!

I have been a Star Wars fan since I first saw Episode IV as a kid, which would have been 1994 when I was 4 years old, since then my passion for the Star Wars universe has never stopped growing. I want to help stretch out the knowledge of canonical Star Wars as much as possible, I have an expansive knowledge base on Star Wars in my head alone. I am particularly interested in The Old Republic Era but I do not limit my interest at all, it's just merely my favorite era of the Star Wars timeline.

I have become a massive fan of The Old Republic game for it's expansive story telling, ingenuity, and my love for choice based RPG's. I have a number of characters, particularly on the Asia Pacific server Dalborra. They are; Drev'ore, Kies'ore, and Marc'ore, and two characters on US server Master Gnost-Dural; dlmarcus and mastermarcus, although these characters will be transfered over to the Asia Pacific servers whence Bioware allows it. My legacy last name for my character family is 'Drevas'. As Drev'ore I am head of a guild known as the Red Blades, focusing on all classes and mostly recruiting from Korriban and Hutta for the new recruits, allowing me to get to know each recruit. The Red Blades also offer loans to high ranking guild members (Officers) of up to 100,000 credits.

NOTE: The Red Blades are both the same on each server.

The Red Blades is my guild, we recruit any and all classes of all species, we prefer to recruit from korriban. This way the players we recruit are of a lower level, be them experienced players or noobs, and this gives me and my fellow officers a chance to personally help on quests from a higher level player speeding up the possible new recruits progress, and to observe how they fair solo to see if they are possibly progressing to fast for their current level making it more difficult for the player in the future on class quests. Another important part of the Red Blades, is that we will offer or accept needed help if possible to fellow members for Flashpoints, Heroic quests, or even the occasional class or side quest. We also offer loans of up to 100,000 Credits to the higher ranked members (Officer). The loan process can "only" be permitted from the guild master; ie myself (Drev'ore for Dalborra or DLMarcus for Master Gnost-Dural), or my First Officer ie: (Tie'Koa for Dalborra or Nukemist for Master Gnost-Dural).

Retrieved from "https://swtor.fandom.com/wiki/User:DL-Marcus?oldid=50428"
Community content is available under CC-BY-SA unless otherwise noted.