Vokk was a male human Sith apprentice who served the Sith Empire during the Cold War against the Galactic Republic.

He is the Sith boss at the end of The Esseles flashpoint. He is a prideful warrior who is convinced that the only way to truly become Sith is to  kill a Jedi, thus being disappointed when a Smuggler or Trooper fights their way through the flashpoint to fight him.

In order to complete the flashpoint, the player(s) must fight and kill Vokk to retrive Ambassador Vyn Asara and return to the Esseless. After Vokk's death, Grand Moff Kilran realizes that he needs to find better allies to complete his objectives.

Vokk is a very powerful Force-user, and believed that the dark side of the Force rendered him and the Sith unstoppable. He was proficient in the use of Force lightning, telekinesis, and Force Choke. Vokk was also a practitioner of Jar'Kai, as he wielded two red-bladed lightsabers, one of which he would often throw at one of his opponents to keep them off-balance while he fought with the second.

Don't stand in the Lightning Storm circles on the ground in this fight. You have about two-five seconds to move before it does some pretty hefty damage. It can easily take off 25-50% health from a dps. His Double Saber Toss ability hits two different players for about 5-7,000 damage each on Hard Mode. He will usually cast a Lightning Storm immediately after finishing this ability, so do not stop and begin healing immediately. Try to keep Force Armor or some sort of shield on every player prior to Vokk using this ability, and heal once you see the Lightning Storm elsewhere. Drain Essence is not much of an issue when it comes to healing whoever is hit with it. He has an enrage timer of around 1 minutes and 30 seconds. After that, his Double Saber Toss ability does about double the damage. It is possible to survive after this timer goes off, but once he starts the Double Saber Tosses it gets a lot harder to keep everyone alive. 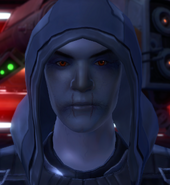 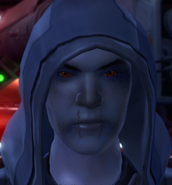 Retrieved from "https://swtor.fandom.com/wiki/Vokk?oldid=118705"
Community content is available under CC-BY-SA unless otherwise noted.