"Carnivorous rodents native to Tatooine, womp rats are a menace to any permanent settlement. They reproduce at a staggering rate and are known to stalk urban alleyways and remote moisture farms alike, prompting some authorities to maintain a standing bounty on the creatures. Vicious and ill-tempered, they prefer meals of organic debris and runoff-but even lone womp rats will attack any creature that gets too close, often spreading virulent disease. When found in the desert, womp rats also hunt in packs, emerging from burrows and swarming their unfortunate victims in a flurry of claws and teeth. A dozen womp rats can overwhelm a full-grown dewback in just a few seconds, and larger packs regularly feast on fresh bantha. They are hideous creatures in general."
―In-game Codex (Bestiary)[src]

Womp rats are a race of larger omnivorous rodent animals native to the planet Tatooine. Some variations of womp rats can cause Womp Rat Fever. It can be cured by purchasing an antidote, sold by medical vendors. 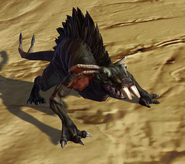 A womp rat being zapped in a firefight.
Add a photo to this gallery

Retrieved from "https://swtor.fandom.com/wiki/Womp_rats?oldid=110220"
Community content is available under CC-BY-SA unless otherwise noted.