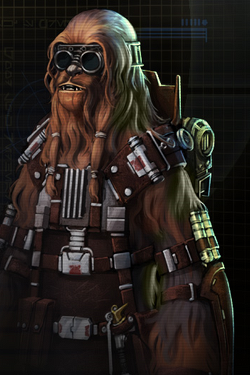 Wookiees are a species of hairy humanoids native to the planet Kashyyyk. Adult Wookiees are tall, and covered with a mid-length coat of brown hair. The young Wookiee pups were also rather large at birth, usually slightly less than a meter, and they grow extremely fast: young Wookiees are fully conscious and able to walk within one standard year. Wookiees are a highly intelligent species that over time mastered many professions, but while they can easily learn many different languages, they lack of the vocal structure to speak anything other than their own language.

The most well-known Wookiee tradition is certainly the life debt. When someone, even an outsider, saved one Wookiee's life, that Wookiee is bound to devote himself to serve his savior for the whole duration of his life.

Wookiees also possess a fierce fighting style, with a preference for blades. While they are born with retractable claws, they are forbidden to use them in combat. If a Wookiee breaks this code of honor, they get labeled as "madclaws" and exiled from their community.

The Wookiees are believed to be native of the planet Kashyyyk, part of the Kashyyyk system, though some of their own lore seems to claim otherwise. Their planet was originally a member world of the Infinite Empire until its collapse. Later, Kashyyyk was discovered by Czerka Corporation, which enslaved the natives. Later, the Wookiees overthrew the local headquarters with the help of Revan and drove the outsiders off their planet.