"The Corellian Engineering Corporation is one of the largest civilian starship manufacturers in the galaxy. Known for building ships that are fast, sturdy and highly customizable, their vessels essentially serve as blank slates for an owner’s modifications. CEC is also known for its unsupported short runs of certain products, when an engineer gets “creative” and supplies customers with uniquely tuned equipment. Luck can be important when buying from CEC. The XS Stock Light Freighter came into service almost twenty years ago. Larger and more versatile than its predecessors, and featuring a variety of optional upgrades that can make it one of the most nimble ships in the galaxy, the model has seen more than its share of use. Rigged with an oversized cargo hold, passenger quarters, multiple laser turrets and a thick armor layer, the XS is an old favorite of captains traveling through dangerous space. The XS has one other feature not widely advertised: its maintenance compartments can be rearranged and concealed to serve as ideal hiding spots for contraband cargo. Even security officers aware of this trick can be stumped by the work of an imaginative owner."
―In-game Codex (Ships)[src]

The classic freighter has advanced by leaps and bounds since the Dynamic-class freighters from the days of the Jedi Civil War. The freighter is larger and more versatile than its predecessors, and the XS Freighter model also features a variety of significant upgrades that make it one of the fastest and most nimble ships in the galaxy. In addition to an enlarged cargo hold, the XS also has secret compartments throughout the ship for transporting contraband and anything else the captain would prefer to keep hidden. If the captain prefers to simply avoid being boarded, the XS has proven itself to be fully capable. Captains of these freighters typically live on board, so the XS freighter has all the creature comforts anyone could ask for, from a recreational lounge to extra sleeping quarters. It’s no wonder that it inspires such loyalty in its owners. During the course of the Smuggler's travels in this ship, they go through several different planets to pick up illegal ship upgrades to make it faster, more maneuverable and have a wider range of hyperspace lanes. 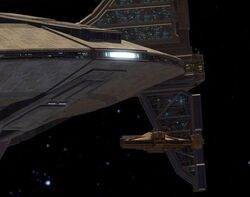 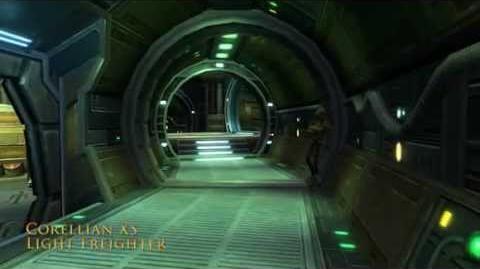 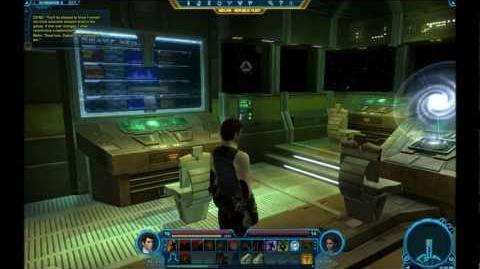 Retrieved from "https://swtor.fandom.com/wiki/XS_Stock_light_freighter?oldid=110530"
Community content is available under CC-BY-SA unless otherwise noted.