"The zeldrate is a sleek predator that used to hunt bormus in the Balmorran plains-but with the bormu population dwindling, the zeldrate has increasingly targeted sentient prey. Imperial troops and resistance fighters wounded during battle are common victims, but bolder zeldrates have assaulted full squads. Prior to the invasion, zeldrates were hunted for a caustic chemical secretion useful as a cleaning solution for industrial parts. Today, with Balmorran industry operating below half capacity, the zeldrate population has seen a slight increase-balanced by the fact that they are often killed seeking easy prey on the battlefield."
―In-game Codex (Bestiary)[src]

The Zeldrate are a race of reptilian predator animals native to the planet Balmorra. 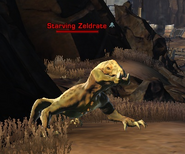 Retrieved from "https://swtor.fandom.com/wiki/Zeldrate?oldid=110224"
Community content is available under CC-BY-SA unless otherwise noted.